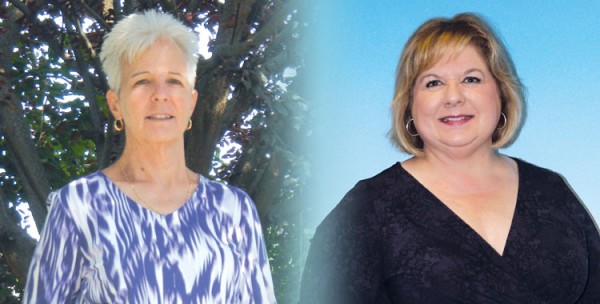 Often the woman herself discovers the cancer.

That was true with Donna Davidson, who found a lump in her breast during self-examination in October 1998. When it was still there a month later, she moved up her previously scheduled mammogram appointment, but “the results came back fine.”

Davidson had a “nagging feeling” something wasn’t right. But because it was the busiest time of year for her as a volunteer with the Special Olympics, she put off further testing.

In April, her doctor sent her for a sonogram and a biopsy. Shortly after he called to give her “not such good news.” Then 47, Davidson had invasive well-differentiated ductal carcinoma, stage 4. But her oncologist said he would treat the cancer and encouraged her not to pay too much attention to the diagnosis.

Still, “shock waves went through me,” Davidson recalled. “I kept saying, ‘Why me?’ It was extremely hard.”

Because breast cancer runs in her family, she underwent a double mastectomy, followed by chemotherapy and radiation.

Despite hair loss, Davidson went wigless. She was trying to express the notion of being “bold, brazen, and bald. Women would wonder if I had had breast cancer, and if I could help anyone … It was a sort of platform.”

She found support in the Special Olympics teams, who showed up wearing baseball caps. To help others, she has spoken to survivors’ groups and volunteered for the American Cancer Society’s Making Strides Walk.

The message she keeps in mind was emblazoned on a banner at the world games of the Special Olympics she attended a while ago: “It’s all about attitude.”

Davidson had considered staying home, but when she read the message, “I realized it was meant for me to be there.”

The journey hasn’t been easy, but it “beats the alternatives,” she said. “Attitude determines how well you’ll do.” While director of Heart Walk at the American Heart Association, Mitzi Jones was beset with a kind of major health issue of a different kind.

A mammogram discovered something “suspicious,” and her doctor sent Jones for a biopsy—and then a second.

A few days later, she received the news—in person.

It was definitely a “blow,” but Jones considered herself “blessed” the cancer had been caught early and was very small.

“After the two biopsies, they almost got all of it,” she said.

After a lumpectomy, she needed only radiation, not chemo. Currently Jones is on tamoxifen, which blocks the actions of estrogen and is used to treat some types of breast cancer. She has been assured the probability of possible recurrence isn’t high.

Jones realized how lucky she was while attending a support group; many of the other women had undergone double mastectomies.

On the other hand, the timing could have been better. Jones was divorced, she had just moved to a new house, and she had just started a new job. Adding to that, Jones’s mother had passed away a year earlier. Plus, her daughter was preparing to leave for her first year of college and Jones’s tonsils had been taken out just a week before.

With other family members living an hour away, Jones was grateful for the Hearts and Hands Sertoma Club, which matches volunteers with breast cancer survivors.

She is convinced stress was part of the reason for her illness—that “God was saying, ‘Slow down.’”

Since the cancer diagnosis, she’s gotten more involved in her church and has found the time to “reflect and take different steps.”

Along the way, too, she met so many strong women.