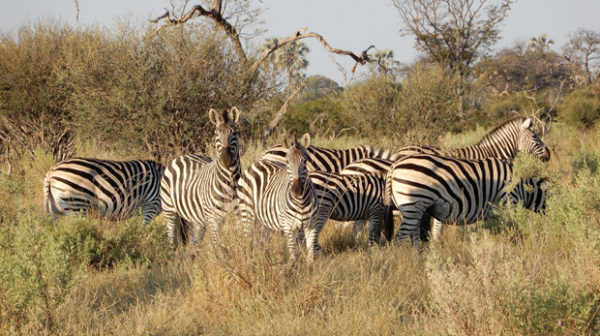 In Pursuit of the Big 5

Our adventure to Botswana started with the desire to go on an African photo safari.

We soon discovered there were too many safari choices, so we decided to consult with an expert and used Zicasso to find a travel agent who specialized in African safaris. It’s a wonderful site that connects people to agents, and soon Intrepid Expeditions contacted us. They recommended we go to the Okavango Delta in Botswana, and they arranged our entire tour.

The Okavango Delta is in the northwestern corner of the country and is a World Heritage Site. It’s the largest inland delta in the world and hosts countless species of animals and birds. Also, Botswana has banned all hunting in the country and has focused on conservation and tourism, which appealed to us.

After two days of traveling, we arrived at the Gomoti Plains Camp, and Mott, our driver and guide, met us along with the scent of African wild sage — a lovely, earthy fragrance laced with a spicy/sweet pine aroma that I’ve come to associate with Botswana.

As I surveyed the bush surrounding us — long wild grasses, clumps of bushes, scraggly trees, and large termite mounds that resembled drippy sand castles — I wondered if the two days of travel and 18 hours crammed in a plane were worth it.

Mott drove us to the camp in the jeep we would become very familiar with over the next six days. It was open on the sides with risers so everyone had a good view. The roof kept the hot afternoon sun off.

We were shown to our “tents.” Yes, it had canvas walls and netting to keep the bugs out, but this was the definition of glamping. The foundation was wood and there was a king-sized bed, lights, and a bathroom with a shower.

We didn’t have time to enjoy the accommodations, though; Mott was eager to take us for the evening game drive. The wildlife was most active at dusk/evenings and dawn/early mornings when it was cooler.

Soon after the drive started, our daughter spotted the first of many animals we would see that night — a giraffe! He was just standing there by the road, eating from a tree and unconcerned about us gaping and clicking a million photos of him. Mott assured us that the animals viewed the jeeps as large blobs and don’t see the tasty morsels — er, people — inside, as long as we remained seated and were quiet.

From there we saw an amazing amount of impalas, zebras, kudu, wildebeests, meerkats, warthogs, baboons, wild dogs, jackals, hyenas, hippos, and crocodiles. Each new animal was a wonder to be exclaimed over.

We learned impalas and zebras stay together because impalas have sharp eyesight and zebras have a keen sense of smell, so together they could spot predators better. Also, if they were all looking in the same direction, it was a good bet a predator was lurking in that area.

Even with all these wonderful animals, Mott hoped we saw what is called the big five: lions, elephants, leopards, rhinos, and African buffaloes. In order to achieve this, the guides frequently communicated with each other, and when a guide spotted one of the five, he called the others.

At one point, Mott received a call that a lion was spotted. He turned the jeep around and took off at what we — hanging on for dear life — called “lion speed” to get there before the lion left. The bumpy ride that ensued was considered an “African massage” by the locals.

Unfortunately we missed seeing him, but on another game drive, we spotted a pair of brothers. They were calmly walking down the road, ignoring the jeep following them. We parked across the road to see them better. I had a perfect view of them from my side. They were coming straight at me. Wait. They. Were. Coming. Straight. At. Me!

I gasped involuntarily. Mott offered me the advice to “just keep taking pictures.” So I did, watching them come closer and closer through the lens of my camera. Although, I have to admit the photos of the lions when they passed right by our jeep — when they were close enough that I could touch them! — are all blurry.

The game drives took up the bulk of the day in camp. There were four-hour drives, one starting at 6 a.m. and another that started at 4 p.m. It was very cold in the morning, but the camp provided warm ponchos and “bush babies” hot water bottles that provided heat.

The afternoons were free, and at first we napped, but we soon adjusted and were able to enjoy the peaceful surroundings.

During the day, we could go to our tent without an escort, but at night, one of the guides accompanied us. Once there, we were stuck. There was no phone, and we couldn’t leave. Well, we could, if we wanted to risk becoming lion food. We had an air horn, however, in case of an emergency (two blasts for a medical issue, one for an animal).

One night, we heard loud crunching and splashing noises from outside, so we turned off all our lights, thinking we might spot a pod of hippos. Our tent was right along the Gomoti River. Much to our disappointment, we couldn’t see anything. However, our tent no longer had water, but we didn’t think it warranted the use of the air horn.

The next morning we learned a herd of elephants had crossed through the camp and stomped on the water pipes. Such was life in the bush.

My favorite ritual of the trip was during the evening game drive. After two hours, we stopped for a “sundowner.” The guide unpacked drinks and snacks to consume as we watched the sunset over the Okavango Delta. It was lovely and peaceful. In fact, the quiet was one of the highlights.

There were plenty of animal sounds, like trumpeting elephants and the low rumble/grunt from the lions who marked their territory with the sound. But no traffic noise, cellphones, and wailing sirens.

After the evening drive, dinner was served under the stars. I’ve never seen so many stars in my life. The sky contained more white than black, as there was no air or light pollution to block the starlight.

By the end of our trip, we spotted the big five, along with hundreds of other animals and birds. It was a fantastic experience and worth the 18 hours of flights. In fact, I would return to Botswana at lion speed.

Whatever You Do, Don’t Run: True Tales of a Botswana Safari Guide, by Peter Allison.