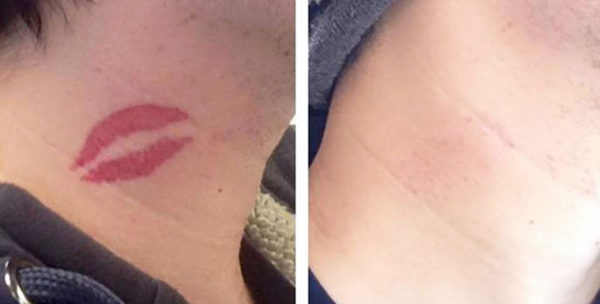 Regretted Tattoos Can Often Be Removed

Once, tattoos seemed rare and socially questionable. Not anymore. According to WebMD, nearly 30 percent of people in the United States have at least one tattoo. Almost half of millennials have one.

In the long run, though, not all of these tattooed individuals are happy about their decision. Sometimes it’s because of professional reasons — they’re working for or attempting to work for an employer who doesn’t permit visible tattoos or doesn’t permit them at all — but as many as 25 percent of those with a tattoo regret having gotten it.

They may not realize that there’s an antidote.

“People assume that they’re stuck with tattoos or that it’s very expensive to remove them,” said Bonnie Fissella, owner of Disappearing Ink in Lancaster. “But I get calls every day asking about it.”

If you’re among the 25 percent of tattoo wearers with regrets, laser tattoo-removal techniques can get rid of your unwanted tattoo with fewer side effects than other treatments. They’re generally safer than methods such as excision, dermabrasion, or salabrasion because laser treatment selectively treats the pigment in the tattoo.

Does tattoo removal damage the skin? “If executed at safe levels, and aftercare is followed, the skin’s integrity is preserved unbelievably well,” said Fissella.

There may be, however, some transient hypo- or hyperpigmentation. If a person has darker skin, extra care needs to be taken, since too many treatments can result in melanin loss in the skin. In contrast, fairer-skinned people don’t have to worry about that.

“It’s important that people who come for tattoo removal understand the procedure, since their expectations can be unrealistic or skewed,” said Fissella.

Lasers remove tattoos by breaking up the pigment colors with a high-intensity light beam.

“Since laser is attracted to the darkness, black is the easiest color to treat,” said Fissella.

The laser breaks up the pigment into little particles, and the body absorbs them. The pigments come off like layers of an onion and are removed via the lymph system.

The number of treatments a person requires depends on her age, size, the color(s) of the tattoo, and the color of her skin. How deep the tattoo pigment goes also affects removal technique.

“Despite the overall safety, laser treatment has several possible side effects,” said Fissella.

They can include initial swelling, puffiness, crusting, and sometimes blistering. On rare occasions, a person may experience an allergic reaction to certain pigment colors being removed, but that is only if she had an initial reaction when the tattoo was applied.

The removal can be pretty painful, but people shouldn’t think the pain is worse than getting the tattoo in the first place.

It takes several treatments to remove a tattoo. After each visit, the tattoo should become progressively lighter.

But to really make a tattoo “disappear” could take nine months or longer. Some cases may take more than a year.

Size affects the required length of a session. If a tattoo is 2 inches by 2 inches, for example, the first session will take 10-15 minutes.

“Time is a huge component in the fading of a tattoo,” said Fissella. “Because the body’s process of disposing broken-down [elements] is an incredibly slow one, waiting longer periods of time between treatments only enhances the process.”

Some colors are more difficult to remove than others, such as aqua, purple, and some pinks, whereas reds and greens respond very well.

If a tattoo band completely encircles a person’s arm or leg, more care is needed. Removing a really large tattoo can cause excessive swelling.

“The laser does its part, but then the body’s circulatory system has to do the rest of the work,” said Fissella.

If the tattoo is farther from the heart — such the person’s wrist or hand, for example — circulation is less efficient, so the treatment lasts longer.

Only doctors and registered nurses are permitted to use injectable anesthetics, so many customers will choose topical numbing agents that can be applied before an appointment.

Right after a session, ice provides the best relief for discomfort. An antibiotic ointment is also necessary and should be applied a few times each day during the healing process. Keep the area bandaged only for a few hours following a treatment.

“There usually can be tingling, and the person may feel heat after the procedures, but most of the discomfort occurs during the treatment,” said Fissella.

As another precaution, when the person is outside in the sun, a lasered tattoo must be covered completely unless it is fully healed.

The requirements for practitioners who are permitted to remove tattoos vary with each state, Fissella pointed out. Pennsylvania doesn’t require a tattoo remover to be an M.D. or an R.N. BW