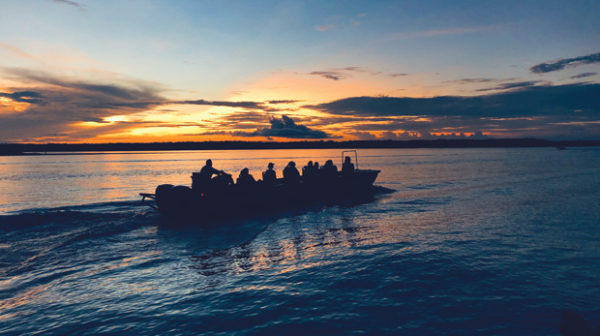 The Amazon River is about 4,000 miles long, runs through seven countries in South America, and stretches to more than 120 miles in width during the wet season. Two major rivers, the Ucayali and the Marañón, are generally believed (Brazil differs) to be the two main rivers that join to form the Amazon. Many tributaries feed into these two main rivers.

There are no bridges spanning the Amazon River, and it contains about 20% of the world’s fresh water and more than 3,000 species of fish, including the pink dolphins (their skin becomes more translucent as they age, so their blood vessels show through) and the meat-eating piranha.

A Trip to This Incredible and Endangered Jewel
My husband and I, along with a former co-worker and her husband, wanted a trip to the Amazon with a small boat that could navigate narrow rivers and tributaries, have a compact group of travelers, and afford us the opportunity to get up close and personal with the people and the flora and fauna of the Peruvian Amazon.

We chose a 10-day trip that included hiking through the Peruvian Amazon rainforest, exploring narrow waterways on skiffs, swimming in a river lagoon, enjoying spectacular wildlife, and visiting (and helping) communities perched on the river shores. Our trip to the Upper Amazon with National Geographic and Linblad Expeditions fit the bill.

Prior to the trip, we looked up the CDC guidelines for visiting the Peruvian Amazon area and got our yellow fever shot, typhoid shot, and anti-malarial pills. We were instructed to start the pills two days before getting to the river and to continue for a week after we left.

Neither of us had any ill effects from the shots/pills, nor did it seem anyone else on the trip did. In fact, the area we were in wasn’t known for Anopheles, the species of mosquito that causes malaria, but we decided to err on the side of caution.

The Boat and the General Schedule
We began our trip in Lima, Peru, and stayed overnight in an airport hotel for an early-morning flight to Iquitos, a city within the Peruvian jungle. Our group embarked on the Delfin II, a 14-cabin, three-story river boat that would house the 27 of us on our odyssey.

Our stateroom was air conditioned with a huge window and a bountiful breakfast buffet, and two delicious sit-down Peruvian meals were provided each day. Seating was not assigned, and tables accommodated two, four, or six people. This provided an easy and effective way for everyone to get to know our fellow passengers.

In our group were two singles, one set of grandparents with their 10-year-old grandson, and 11 couples. The group was predominantly working or retired academics, scientists, and businesspeople.

There were almost as many crew members as passengers, including three native naturalists. A National Geographic photographer named Socrates (gotta love that name!) was also on the ship and conducted photography classes — whether you used your iPhone for pics (that would be me) or had one of those cameras with a lens about as long as your body, he would provide helpful suggestions to improve our pictures.

The naturalists, besides being our guides in the skiffs, also gave talks about the indigenous people, customs, history, and food of the area, as well as initiatives to help improve life for those living on the river by encouraging micro-businesses such as fish farms and handicraft production to sell to those exploring the area.

A Typical Day
Our day started with a water outing on the skiffs (there were three skiffs and each held about a dozen people) at 6 a.m., followed by breakfast, then another outing (perhaps a walk in the rainforest, kayaking, exploring via skiff, or a visit to a river community), then lunch, then another outing, then a lecture and dinner.

We were provided rain ponchos (we only needed them once; we were very lucky) and boots for walking through the muddy rainforest. We chose to go in June, which is the drier season.

No activity was “mandatory,” but there was excellent participation … including drinking pisco sours at the boat’s bar! In addition to the large dining room with huge windows, there was a large air-conditioned room on the top floor as well as an open-air sitting area that could easily accommodate the entire group, so there was no feeling “trapped” in your room. And two massage therapists were available if you desired a little pampering.

Highlights
For most of us, the highlight was observing the rich diversity of wildlife in the air, water, and land. From tarantulas, anacondas, monkeys, parakeets, and sloths to bats, leaf-cutter ants, armored catfish, caimans, and dolphins, the beauty, majesty, and diversity of the area will remain a lifelong memory.

Much of our trip was within the gorgeous 8,000-square-mile Peruvian Pacaya-Samiria National Reserve. The communities situated along the river were also intriguing, and we saw how the people were striving to improve their health, increase their education, and learn new skills. Our three naturalists came from these river communities.

By the end of the trip, we had new friends and new memories, and we wistfully said goodbye to the enchanting, amazing, awe-inspiring — yet fragile and threatened — Amazon.

Jan Cullinane, B.S., M.Ed., and ABD, is an award-winning retirement author, speaker, and consultant. Her current book is The Single Woman’s Guide to Retirement. Visit her at jancullinane.com.