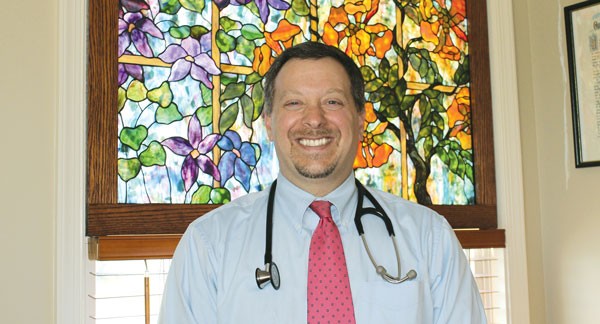 A national survey from the Centers for Disease Control and Prevention found that women are three times more likely than men to see a doctor on a regular basis. This is the case despite the fact that, on average, men have shorter life expectancies than women and face high mortality rates for conditions like heart disease and cancer.

If it’s been far too long since an important man in your life went for a checkup, urge him to consider these prevalent men’s health issues—and then to book an appointment with his M.D.

Basic Health Considerations for Men
According to Dr. Robert A. Sallavanti of Sallavanti & Cotter Family Medicine, if a man hasn’t been to the doctor in a while, the first step will be to review his medical history and get an overview of his current health habits.

“Those are the questions we’re going to review right away, along with others depending on the patient’s specific risk factors.”

For many men, the first steps toward getting healthier are quitting smoking, if they currently do, and working toward a healthy weight.

Cardiovascular Disease. While heart disease is the leading cause of death among both men and women, the condition catches up to men a bit earlier, and therefore their average age of death from cardiovascular disease is younger—under 65 years old.

Because of the early onset, it’s never too soon for men to start taking steps to improve their cardiovascular health, such as smoking cessation, healthier eating, and increasing physical activity.

Sallavanti also likes to discuss the symptoms of heart attacks with his male patients.

“It’s not just the chest pain you usually hear about,” he explained. “For some it’s a shortness of breath, or the feeling of someone sitting on your chest. There is sometimes no real chest pain.”

Prostate Cancer. Prostate cancer is the most common cancer found in men and the second leading type of cancer death in men, second only to lung cancer. Fortunately, if it’s found in the early stages, prostate cancer is usually treatable.

“In younger men, if you find it at an early age, you’re going to save their lives,” said Sallavanti.

The problem is that prostate cancer is often asymptomatic, meaning that the majority of patients diagnosed show no obvious symptoms of the disease—which makes screening that much more vital. On the other hand, some of the screenings can actually lead to more problems, and “patients can end up with symptoms they didn’t have in the first place,” Sallavanti explained.

That’s part of the reason having a strong connection with your doctor, who can help determine when and how to screen for prostate cancer, is so important.

“It’s so dependent on age and other risk factors,” Sallavanti said. “All males should have a conversation with their doctors about when to screen.”

Sexual Health. While sexual health issues may not threaten the very lives of men, they are still significant problems that should be discussed between men and their doctors. It’s not just a problem among older men, either.

“While the older we get, the higher the risk,” Sallavanti explained. “Sexual dysfunction can show up even in someone 30 years old.”

Sometimes the issue is one of functionality, other times one of desire, but either way, “it’s clearly a fairly significant problem,” said Sallavanti.

With that in mind, doctors will usually ask about sexual health problems as part of their overall health review, and men shouldn’t be afraid to speak up if they are facing any issues in this area.

Colon Screenings. While having a colonoscopy is generally a dreaded experience, this screening is absolutely vital for both men and women after the age of 50.

“In terms of truly being able to save lives, this is so important,” Sallavanti said.

That’s because regular testing is one of the most effective tools for both preventing colorectal cancer in the first place—since removing polyps that appear in the test can actually help stop the cancer from ever starting—and for finding colorectal cancer early, when it’s much easier to treat.

Getting Men to the Doctor
Going to the doctor regularly is key for maintaining good health and catching diseases early—or preventing them from ever developing, if possible.

But getting men on board isn’t always easy. If you’re struggling to convince a man in your life to make an appointment, Sallavanti recommends making an emotional appeal.

“Tell him that you want him to live a long, healthy, and productive life,” he suggests, “and that you want to be able to enjoy your time together, even when you’re older.”

Another factor to consider, especially for younger men, is children.

“We men like to be providers,” Sallavanti said, “so we want to see our kids get older and go through school; we want to meet our grandkids. That’s a pretty powerful motivator to prioritize our health.” BW