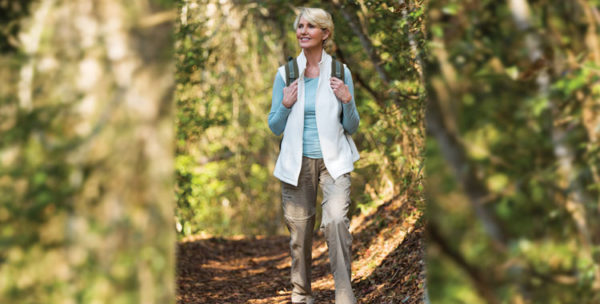 Tina Prins is both a Lyme disease victim and an advocate.

On July 1, 2013, she pulled off a tick and got symptoms within hours. Urgent care gave her 10 days of doxycycline, the typical antibiotic for Lyme disease. Prins tested positive for Lyme and a co-infection weeks later and was treated for seven months but didn’t improve.

A second, more Lyme-literate doctor diagnosed her with second co-infection and determined she had had Lyme prior to 2013, likely since 1987.

It can be a complicated disease.

Lyme is a bacterial infection caused by Borrelia burgdorferi, which is transmitted to humans through the bite of an infected tick. These ticks can also transmit other diseases and infect pets and livestock. Lyme disease is the fastest growing vector-borne infectious disease in the United States, according to the Centers for Disease Control and Prevention.

Borrelia burgdorferi penetrates your tissues, muscles, and organs if it goes undetected or is undertreated.

Cases of Lyme disease have been reported in all 67 counties of Pennsylvania. In fact, the Commonwealth is No. 1 in the country in reported cases.

It’s a myth that deer are the primary culprit in spreading Lyme. They don’t give ticks Lyme; they are only the hosts that feed them.Mice and small mammals are the culprits who are infected and transmit pathogens to the ticks.

Any time you venture outside, there is risk of tick contact. They are active every season.

Many people aren’t aware they’ve been bitten and may not make a connection when they begin to experience symptoms, which can be weeks, months, or even years after.

Symptoms
Not everyone will get a bulls-eye (or red-expanding) rash, and not everyone will have the same symptoms. If this rash does appear, it indicates the presence of Lyme.

Other symptoms include flu-like manifestations, such as fever, chills, and joint pain; neurological issues, such as headache, memory, or concentration disturbance; fatigue; Bell’s palsy; fainting; shooting pains; arthritis; and lightheadedness.

Co-infections or other tick-borne infections are very common. They can be transmitted at the same time as Lyme disease from a tick bite, but may require different treatments.

Misdiagnosis
Lyme disease is known as the “great imitator.” It is frequently misdiagnosed as multiple sclerosis, Parkinson’s, ALS, Alzheimer’s disease, rheumatoid arthritis, depression, or other psychiatric illnesses, among other conditions.

Treatments
The International Lyme and Associated Diseases Society recommends 20 days of antibiotics for deer tick bites in which there is evidence of tick feeding, regardless of the degree of tick engorgement or the infection rate of the local tick population

guidelines on Lyme disease treatment: the guidelines encourage clinicians to base therapy on the  patients’ response to treatment, including follow-up and therapy adjustments.

An unknown percentage of people have chronic Lyme; they report prolonged symptoms despite prior antibiotic treatment.

Being infected with co-infections leads to more severe outcomes.

Prevention
Dare2B Tick Aware is a statewide, community-basedLyme and tick-borne disease prevention program with PA Lyme Resource Network, a 501(c)(3) non-profit organization founded in 2012 by individuals affected by Lyme/tick-borne diseases, including Prins. It’s a coalition of all-volunteer, non-profit organizations across the state committed to education, patient advocacy, support, and prevention.

Dare 2B Tick Aware uses the most-current research and standardizes prevention messages across the state. It is also working on programs for schools and health care practitioners.

“As a Lyme patient, board member, and marketing professional, I was perfectly aligned to help create the program with PA Lyme Resource Network,” said Prins. “In 2006, I started my own business, Stratega Marketing, which uses my professional skills and personal experiences to help others.”

The Dare 2B Tick Aware program includes a tick ID card plus a series of brochures available for free download from www.palyme.org

For proper tick removal, never cover or smother a tick to get it to release. Always use pointed tweezers; grasp as close to skin as possible and pull straight out. Do not twist or jerk.

Not all ticks are infectious. Within endemic areas, there is considerable variation in tick infection rates depending on the type of habitat, presence of wildlife, and other factors.

You can request an educational seminar for your community group by contacting info@palyme.org. To find a doctor knowledgeable about Lyme, write: referral@palyme.org. PA Lyme sponsors 19 regional monthly support groups across the state.

“The most-important thing is prevention,” said Pirns. “So many articles list symptoms, which is fine, but the goal is to not get bitten in the first place. That means prevention in way of spraying skin and clothes and where ticks live — such as in your backyard.”

Second in importance, she added, is knowing that ticks can carry not only Lyme, but also other diseases and infections.   “Third would be resources,” she continued. Such as the central PA support group and the PA Lyme website with downloadable prevention materials and a questionnaire to determine your risk.